(Meaning of the words are given in the brackets)

Corruption in high places is a malaise (A General Feeling of Discomfort, Unhappiness) that is easy to diagnose but difficult to cure. Even in the rare cases they are arraigned (call or bring (someone) before a court to answer a criminal charge, Prosecute for) before a court, top politicians often pay their way through legal battles, and spend little or no time in incarceration (the state of being confined in prison; imprisonment). The conviction of AIADMK general secretary V.K. Sasikala in the disproportionate assets case involving her close friend, former Chief Minister Jayalalithaa, as the prime accused, is a significant marker in India’s legal and political history. The charges against Jayalalithaa abated (Make less active or intense, Subside) following her death last December, but Ms. Sasikala had to face the full wrath of the Supreme Court, which has upheld the trial court order in toto (Entirely), leaving her to spend four years in prison. As Justice Amitava Roy wrote in his concurring order, “corruption is a vice of insatiable (Impossible to satisfy) avarice (Extreme greed on material Wealth) for self-aggrandisement (Ego-Trip) by the unscrupulous (Without Principles), taking unfair advantage of their power and authority.” While there is no denying that the judgment has strengthened confidence in the justice delivery system, it is mystifying (Confuse) that the ruling has come more than eight months after the two-member Bench concluded hearing arguments in the case. All the more so, since the basic thrust (Driving Force) of the judgment only endorsed (Supported) the position taken by the trial court in Bengaluru, which held all the accused in the case guilty. Given that the Supreme Court had pressed the Karnataka High Court to hear the appeal expeditiously (With Efficiency), there was no justification in such an inordinate (Beyond normal limits, Excessive) delay. 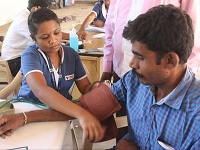