(1-5) Study the following information carefully and answer the given questions.

A, B, C, D, E, F, G and H are sitting around a circular table, facing the centre. Each of them plays a different game, viz Tennis, Hockey, Cricket, Football, Chess, Golf, Swimming and Shooting. The Golfer sits third to the left of A. The one who plays Chess is an immediate neighbour of A. E, who plays Hockey, sits third to the right of the Chess player. G is neither a Swimmer nor a Shooter. B and F always sit adjacent to each other. There is only one person between A and E.The Swimmer sits second to the left of C. F sits second to the right of the Shooter. Neither B nor F plays Chess. A is neither a Cricketer nor a shooter and sits opposite D. The Football player and the Hockey player sit opposite each other. C plays neither Football nor Golf. There is at least one player between the Shooter and the Hockey player.

1. Who among the following is a cricketer?

2.What is the position of H with respect to the golfer?

1) Third to the left

2) Third to the right

3) Fifth to the left

4) Fourth to the left

3. Which of the following is true with respect to the given sitting arrangement?

1)The Shooter is on the immediate left of the Cricketer.

2)The Golfer and the Swimmer sit opposite to each other.

3)The Football player sits exactly between the Cricketer and the Chess player.

4. Which of the following would come in place of question mark based upon the given sitting arrangement? EC, BF, HE, FG, ?

5. How many players sit between G and the Shooter when counted in clockwise direction?

6.What is the position of the Swimmer with respect to the Tennis player?

1) Third to the left

4) Second to the right 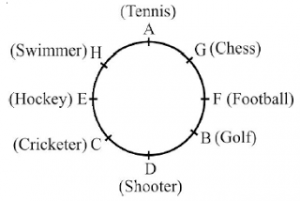 3) 2; Golfer B and Swimmer H sit opposite each other.

(7-12) Study the following information and answer the questions given below:

7.Who amongst the following sit at extreme ends of the rows?

8.Who amongst the following faces S?

9.How many persons are seated between V and R?

11. Which of the following is true regarding T?

(2) V is an immediate neighbour of T

12. Four of the following five are alike in a certain way based on the given arrangement and so form a group. Which is the one that does not belong to that group?