(1-5) Read the following information carefully and answer the given questions.

Eight persons Ankita, Babita, Chottu, Dheeru, Ehshan, Farukh, Golu and Harshita are sitting around a circle facing towards the centre. There are three generations in the family and three married couples.Babita and Golu have two children. Ehshan, the husband of Ankita is sitting to her immediate right and their child is sitting exactly opposite to Ankita.Ankita’s brother is sitting 2nd to her left with their father on his left.Dheeru’s wife Harshita is to her immediate right. Farukh & Babita are sitting together. Babita is an immediate neighbor of Ehshan.

1.Who is the child of Ankita?

2.Who is to the immediate left of Golu?

3.Which of the following pairs is a bachelor in the family?

4.Which of the following has the first person sitting to immediate left of the second person?

5.Who is the child of Harshita? 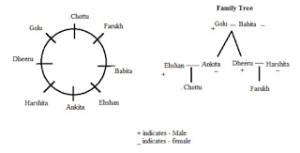 6.Who is sitting second to the right of E?

7.Who amongst the following is the professor?

9.What is the position of L with respect to the Scientist?

10.Which of the following statements is true according to the given arrangement?

(1) The lawyer is second to the left of the Doctor

(2) E is an immediate neighbour of the Financial Analyst

(3) H sits exactly between F and the Financial Analyst

(4) Only four people sit between the Columnist and F

(5) All of the given statements are true 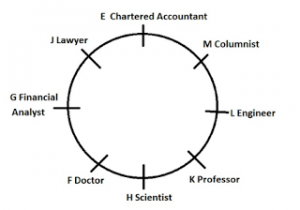