D.1-5) Answer the following questions based on the information given below:

No person plays against the same person more than once in the event. No ties are permitted in any of the matches. The observations after the completion of place — I and place — II are as given below.

Q.1) The two persons that defeated the leader of place-I are?

Q.2) The only person(s) that won both matches in place-II is (are)?

Q.3) The persons that won exactly two matches in the event are?

Q.5) Which person lost all the matches?

D.6-10) Study the following information carefully to answer the given questions

between each other but not necessarily in the same order. Some of them are facing the centre while some are facing outside.(i.e. away from the centre) 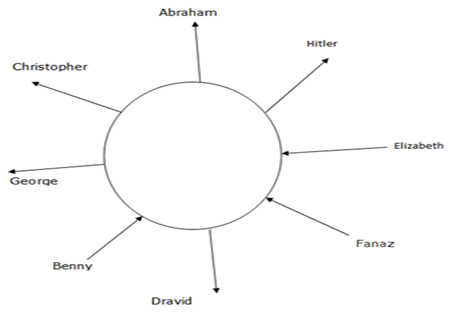 Q.6) Which of the following statements is true as per the given arrangement?

a) Fanaz faces the centre

b) Only three people sit between Elizabeth and Abraham

c) George sits to the immediate right of Christopher

d) None of the given options is true

e) Christopher is an immediate neighbour of Dravid

Click Here to View Answer
a) Fanaz faces the centre

Q.7) Who among the following sits third to the left of Elizabeth?

Q.8) How many people face the centre as per the given arrangement?

Q.9) What will come in place of question mark (?) in the given series based on the positions as given in the arrangement?

Q.10) As per the given arrangement Dravid is related to Abraham in the same way as Benny is related to Hitler, Following the same pattern to whom is Christopher related?

To go Back to TARGET SBI PO : Click here