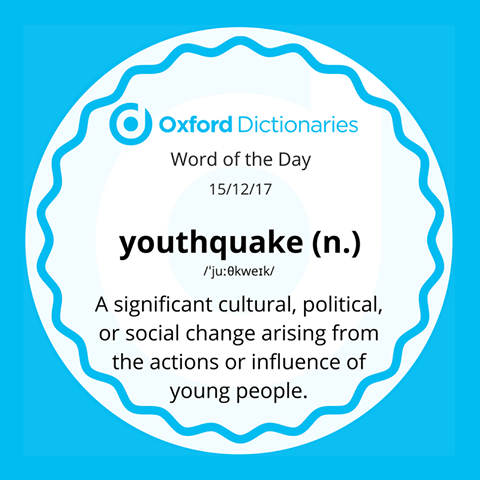 If you are an ardent quizzer and a current affairs expert , you would have definitely crossed this word called “WORD of the YEAR” which are released by various reputed experts in the field of English to be precise. What is special in that as there are lots of words which constitute the English language. The words mention or defines the popularity that specific word got that particular year.

For this year Oxford Dictionaries has chosen “YOUTHQUAKE” as the ” WORD OF THE YEAR” of 2017 from a set of words which are in the competition.

If you haven’t heard of “YOUTHQUAKE”, then there are certain reasons as some of the words are limited to certain regions. We have heard of the word in some form or other , but this is something that is drastically gaining importance.

You can check the Current Affairs of this particular news from the one that is given below.

Other Important Word of the YEAR are

Dictionary.com “Word of the Year” – “COMPLICIT”

So what is the meaning of the WORD OF THE YEAR – “YOUTHQUAKE” ?

“A significant cultural, political, or social change arising from the actions or influence of young people.”

In India , specifically in the southern states there was a sudden protest when Jallikattu – “a famous Bull embracing event (normally called as Eru thaluvuthal in the vernacular language) held during the Pongal Festival in Tamilnadu encountered a ban for the sport. The sport (Jallikattu) was banned by the Supreme Court in a decision citing cruelty to animals based on a lawsuit filed by the animal rights activists group, People for the Ethical Treatment of Animals (PETA), which asserted that the tradition violates the Prevention of Cruelty to Animals Act(PCA).

There were a huge protest by the Youths of the State to protect the sport and the ban was upheld. So this incident pertains to the “YOUTHQUAKE” where the YOUTH’s were vital in bringing the change. This  is the best example of the word in INDIA in recent times.

The word was chose because of the up rise in the recent Elections in Great Britain , New Zealand and also in the recent marriage equality referendum that happened in Australia.

The word “YOUTHQUAKE” is already in the Dicitonary and it usage dates back to the year 1965 by the Vogue’s Editor in-chief Diana Vreeland to represent a Cultural movement and also to describe how British youth were changing fashion and music around the world.

Antifa – a political protest movement comprising autonomous groups affiliated by their militant opposition to fascism and other forms of extreme right-wing ideology.

Broflake – a man who is readily upset or offended by progressive attitudes that conflict with his more conventional or conservative views.

Gorpcore – a style of dress incorporating utilitarian clothing of a type worn for outdoor activities.

Kompromat – compromising information collected for use in blackmailing, discrediting, or manipulating someone, typically for political purposes.

Milkshake duck – a person or thing that initially inspires delight on social media but is soon revealed to have a distasteful or repugnant past.

Newsjacking – the practice of taking advantage of current events or news stories in such a way as to promote or advertise one’s product or brand.

Unicorn – denoting something, especially an item of food or drink, that is dyed in rainbow colours, decorated with glitter, etc.

White fragility – discomfort and defensiveness on the part of a white person when confronted by information about racial inequality and injustice.

But ultimately “YOUTHQUAKE” was chose as the “WORD OF THE YEAR” 2017 by Oxford Dictionaries.