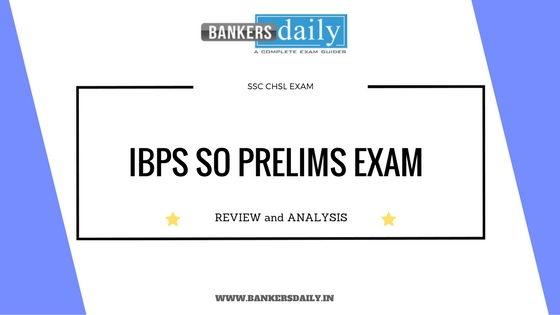 The last day of the year has arrived and even the last exam of the year too had arrived and we know you have been eagerly waiting for the last exam review of the year which is the IBPS SO Prelims Exam 2017. Yesterday’s exam was in the easy to moderate range, so we can expect the same in today’s exam also. No one can surely say the level of the exam as there were surprising elements added for some of the exams in some of the batches, so it is merely unpredictable to define the level of the questions and the firmness of the questions and level of difficulty.

The review of the IBPS SO Prelims Exam 2017 – Day 2 -Slot 1 is here and as usual the level of difficulty level of the exam was the same as that of the previous day. The English Language and Reasoning sections constitutes for the maximum marks in the IBPS SO Law Officer Exam and Rajabhasha Adhikari. For the Other posts like IT Officer and Agricultural and HR Officer , the exam pattern consists of Quantitative Aptitude instead of the General Awareness section.

We have shared the review of today’s exam down and if you have attended the exam, please give us your opinion about the exam and what is the best attempt.

We have posted the review and analysis of the IBPS SO Prelims Exam that happened on 30th December, 2017 and also the questions asked in the Exam in the specific posts and if you haven’t visited that , please check them now.

The Specialists Officer exam is conducted for various posts and every posts has it’s own prelims exam according to the newly changed prelims Exam pattern. The IT Officer , HR and Marketing and Agricultural Field Officer postings has the same format of exam and the Law officer and Rajbhasha Adhikari has a different pattern when considering with the other posts.

If you have written the exam of IBPS SO Prelims Exam 2017, you can help your fellow candidates and other aspirants with some of the queries like

(ii) What is the difficulty level of the IBPS SO Prelims Exam 2017 ?

(iii) Is any topics left from the main stream topics in the IBPS SO Prelims Exam 2017 ?

(v) Which section is the toughest among the different ones in the IBPS SO Prelims Exam 2017 ?

(vi) Which can be considered as the scoring part in the recently held IBPS SO Prelims Exam 2017 ?

So in today’s  IBPS SO Prelims Exam 2017, the Reasoning section was the easiest and will be the scoring section and the english section was as usual in a different league with that section testing all the candidates to the core by introducing new pattern questions like that of  other exams.

The General awareness section for the Law Officer Posts and Rajabhasa Adhikari was easier. Most of the questions were from the recent current affairs section and a candidate who have studied the current affairs part of recent events would have attempted more number of questions. Static GK and Banking awareness questions accounted for half the number of questions in total and that too were asked from the recent events. So this section will be the score booster for the candidates.

You can check the Exam Pattern of IBPS SO 2017 from the link below.