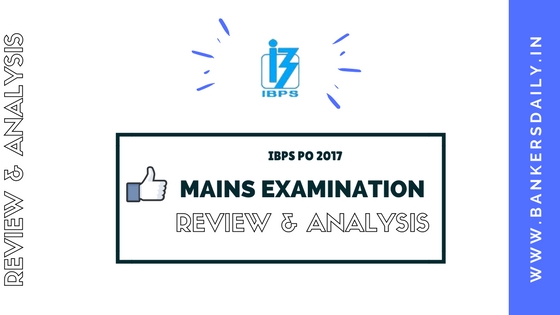 The IBPS PO Mains Examination is over and we have the review of the most sought exam of the year 2017. The feedback which we are getting is quite surprising as the topics asked in the exams are twisted and overall the exam was in the moderate range.

In few minutes we will be able to provide you the full detailed analysis and review of the IBPS PO Mains Examination 2017. Also additionally you can expect the questions asked from the exams which will be added to the website once we get the feedback from the candidates. So this will help you in the preparations of the other exams which are coming in the forthcoming days. This week is considered to be a week of exams as this week has IBPS PO Mains Examination 2017 followed by RBI Assistant 2017. The next week has the next most sought exam of the year, IBPS Clerk Preliminary Examination 2017, which is happening for 4 days since the number of candidates applying for the exams are more, so the competition is high compared to others.

You can additionally expect us to provide the Good attempts made in the exam and overall number of attempts and also the level of difficulty of the exam in the IBPS PO Mains Examination 2017. The exam will also reveal the important things like the cutoff marks for the IBPS PO Mains Examination 2017. This is of utmost importance as the cutoff marks will decide the dreams of all the aspirants.

You can expect the review @ 12. 30 P.M today with the Questions asked in the exam

There is Negative Mark of .25 for Each Wrong Answer

Missing Numbers were asked which was in the easier level and 3 DI were asked based on TABLE, BAR and a paragraph. The bar graph was based on the Profit and Loss topic. One case study problem was also asked which was easier. Surprisingly Data Sufficiency problems were asked in all the exams now and IBPS PO Mains 2017 Examination is not an excuse for that. There were less number of Miscellaneous which when asked were based on the combination of 2 to 3 topics in addition to it.

Reasoning section was considered as the most difficult one out of the all the sections. Arrangements and Puzzles were time consuming and longer. One Linear and One circle based arrangement were asked. One Puzzle and also another one was in the linear arrangement were asked. The real surprise in the segment was the Coding and Decoding along with the coded inequalities. Usually both will not be equally asked , but this time this was a different case. One set of Statement and Arguments were asked. Out of the all, as said above , this section will decided the dreams of the aspirants of becoming a banker in the IBPS PO Mains Examination 2017.

English section is the the one in which aspirants would be puzzled to find the topics and to choose the answers. One set of reading comprehension were asked which were based on 2 sets of Paragraphs. This time, a sentence based Cloze Test was asked (This type was asked before in one of the exams and we have made available examples of these too). Filler based questions were limited. One set of Sentence Replacement was also asked. One different set of topic was asked which asked to choose the same meaning / antonym from the given set of words and to choose the option and this section was challenging in the English section.

Your valuable feedback about the exams and the questions asked in the IBPS PO Mains Examination 2017 will be helpful for the other candidates and also to the ones who wish to know things in the exam.

Important NOTE
We are expecting your valuable feedbacks about IBPS PO Mains from the aspirants side those who are attending  on 26th November, 2017

You can check the Last minute tips for the IBPS PO Mains Examination 2017 from the link given below.

Other Related Articles Regarding Descriptive Section: 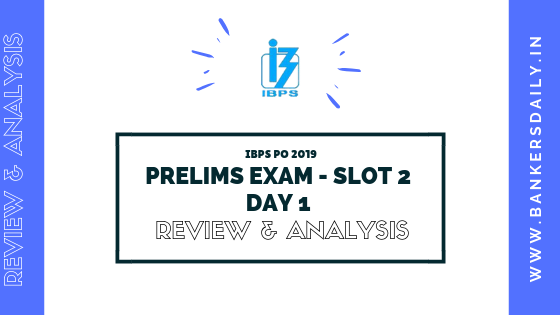